Instrumental ensemble "ESSE-Quintet", the winner of world music championship is going to Canada to perform as special guests during the 66th International Competition "Coupe Mondiale".  19.08.2013 10:12 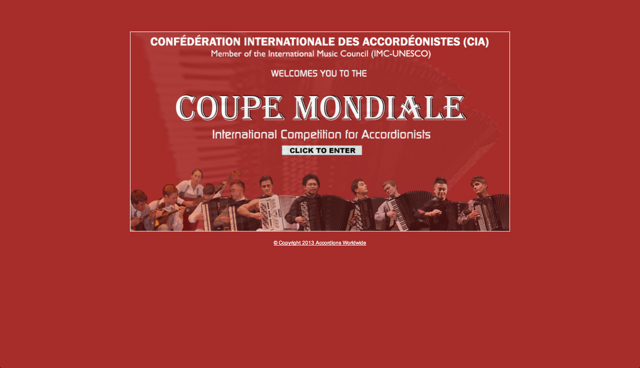 From 19 to 25 August 2013 in one of the most beautiful cities in the world, the capital of British Columbia (Canada) in Victoria, will be held the 66-th World Cup (official Coupe Mondiale) - an annual contest for accordionists organized by the International Confederation of Accordionists (CIA), which is a member of the Music Council of UNESCO since 1975. CIA organization was founded in 1935 in Paris by representatives from the three countries - France, Germany and Switzerland. The first international competition "World Cup" was held in Paris in 1938. Now, the CIA includes 33 national organizations from 28 countries.

This is the most famous and prestigious competition for accordionists and held every year in different countries of the world. Since 1968, with the victory of George Vostrelova, the Soviet/Russian performers have become winners for the 34 times, including the category of Senior Coupe Mondiale -19 times. In Russia "World Cup" has never been held. First "World Cup" is planning to be in 2016 in Rostov-na-Donu.

Last year, the 65th Word Coupe was held in the ancient Italian city Spoleto and "the Russian team" for the first time won a “team victory”, leaving behind a very strong team from China and Serbia. In the struggle Russian musicians became winners in two of the seven categories: Dmitry Kiselev (category "Master"), and the ensemble ESSE-Quintet (category "Ensemble") - all members are from the Culture capital of Russia Saint-Petersburg. Ensemble ESSE-Quintet from Saint-Petersburg’s State University of Culture and Arts for the 65-year history of the competition was the first group from Saint-Petersburg, who won this prestigious competition.

This year, the results of the All-Russian selection to participate in the World Championships in Canada qualified 11 participants from different cities of Russia. National selection system is supported by the Interregional Association of Accordion / mab / - member of the International Confederation of Accordion / CIA / Creative School "Master Class" - a member of the World Confederation of Accordion / MCA /. The selection includes the largest number of national and international competitions for the bayanists/accordionists. Among other members of the Russian team - two persons are from Saint-Petersburg: already experienced "fighter", the winner of many music contests Alexander Kolomiytsev from the Saint-Petersburg State Conservatory and junior, Nikolai Ovchinnikov from Special Music School at the St. Petersburg Conservatory. As special guests in Canada will go the winner of international competitions, the winner of Saint-Petersburg Government Youth Award group "ESSE-QUINTET", which will take part in the World Cup’s concert program.